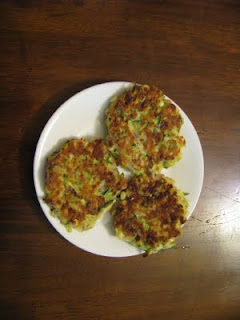 Some people love leftovers and some people hate them. I love to reuse the ingredients and make them into something else and my sister usually throws them away. I know quite a few people who dislike leftovers and don't take doggie bags from restaurants. I think there's such an opportunity for creativity with leftover food to make something new and different and delicious.

I'm getting ready to go to a TCM Kongress in Denmark and so it's time to clean out the fridge and use everything up. These times are when I get most creative as I won't let myself buy anything new. I had leftover baked salmon - baked with onion and lemon and some corn on the cob. I also had a slightly wilted zucchini and half an onion. When I combined those together with a bit of flour and two eggs, I created Salmon, Zucchini and Corn Cakes and they were wonderful! I've always loved Salmon Cakes, but I usually make them with canned salmon and crumbled up Saltine Crackers and Zucchini Cakes have always been one of my favorite ways, besides Zucchini Bread, to use up the end of the summer zucchini. And, this recipe was a big hit with my son, who isn't fond of either of the other two kinds of cakes. I think the salmon flavor mellows and is not as pronounced and the corn adds that wonderful bit of sweetness and texture that keeps the cake from being too soft. This recipe can easily be doubled and for me, it is a keeper so I'm happy to share it with you!

In a large bowl, make sure salmon is flaked into small pieces and add zucchini, corn, onion, eggs along with the flour, salt and pepper. Stir until thoroughly mixed.

In a large frying pan, heat up the vegetable oil until just hot. Using a large soup spoon, scoop a heaping spoonful of salmon mixture and put into the pan and press down to make 2 1/2 - 3" patties. Make as many fit into a pan (I could make 8) and fry until very browned (about 3 minutes) before turning over. Cook until the other side is brown (another 2 -3 minutes) and then remove to plate covered with a paper towel. Put into oven if you are making more than one batch. I like to sprinkle them with a bit of additional salt before serving. You can serve with a slice of lemon, ketchup, cocktail sauce or tartar sauce.

Salmon and eggs are both part of the Water Element so that element predominates. Zucchini and corn are from the Earth Element. Wheat flour contributes the Wood Element and a squeeze of lemon when serving adds a bit more, whereas onion brings in the Metal Element. Pepper adds only a hint of the Fire Element, so that one needs building up. My son eats these with ketchup or cocktail sauce and that's one way to bring Fire in, but I also made a side salad of arugula and tomatoes to balance out the meal.