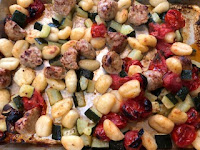 I'm very fond of sheet pan dinners as they take so little effort as almost everything cooks together in the oven and so there's also very little cleanup. So, I decided to make Gluten Free Gnocchi with some vegetables. I had read about cooking Gnocchi directly in the oven on broil, but that was for regular Gnocchi. I wanted to use Le Veneziane GF Gnocchi and I knew that it needed to be cooked first. The good new is that it only take a minute in boiling water to get it ready for the sheet pan. And, you can do it while the other ingredients are cooking on the sheet pan and then add it in for the last five minutes on broil to crisp it up. I decided to make little Italian Sausage meatballs along with Cherry Tomatoes and cut up Zucchini. I also decided not to add fresh Onion and Garlic, but instead used both Garlic and Onion Powder as I wanted the flavor and I wanted to add Maldon Sea Salt. Of course, you can add Onion and Garlic if you like and you can also add some Red Pepper pieces too.  I cooked the Sausage and Vegetables in the oven for 20 minutes and then added the Gnocchi and cooked for 5 more minutes under the broiler. It was delicious!  This is a half recipe because I made it for myself and it was fantastic heated up the next day for lunch too!

2 Italian Sausages, removed from casing and made into small meatballs

Heat the Water in a saucepan and bring to a boil. When boiling, add the Gnocchi and cook for 1 - 1 1/2 minutes. Drain and reserve in a bowl. Toss with Olive Oil.

Place the Italian Sausage Meatballs, Zucchini pieces and Cherry Tomatoes on a sheet pan. Sprinkle with 2 Tablespoons of Olive Oil and the Garlic and Onion Powder and Salt. Placce in the oven and cook for 20 minutes. Remove and turn the oven to broil.

Add the Gnocchi to the pan and put in the pan with the Sausage, Tomatoes and Zucchini. Cook for 5 - 7 minutes or until the Gnocchi starts too crisp. Serve with Parmesan Cheese if desired.

Note:  If you would like crispier Gnocchi, cook in the broiler separately until crisp and then add back to the other ingredients.

The Gnocchi is made from primarily Rice Flour and that belongs to the Metal Element and the Garlic and Onion Powder add even more. The Italian Sausage was made of Pork, which contributes the Water Element. The Cherry Tomatoes contribute the Fire Element and the Zucchini adds the Earth Element along with a little fo the Wood Element too. And, finally the Olive Oil makes sure that more of the Wood Element is present. Who knew that this simple dinner could be so balanced!