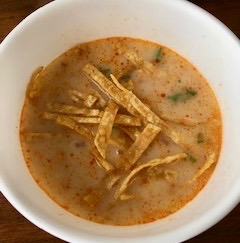 When I was in my 20s and first living on my own, my apartment was down the street from an amazing little Mexican Taco Stand. I used to eat there at least once a week, and often much more!  One of my favorite Tacos was Chorizo and Potato. I don't know why, but I haven't had one in years, so I decided to make some. The problem was that I only had a few Corn Tortillas that were a bit dried out so they were only good for chips, so I improvised and ended up making this deconstructed Chorizo and Potato Taco as a soup!

Oh my, I was so happy with the flavors of this soup and it was the perfect post-Christmas meal. I made a basic Potato Soup with Onions and Chicken Broth and then cooked the Chorizo on the side and swirled it in when it was done. And, you could easily make it Vegan with Soy Chorizo and Vegetable Broth. I topped it with a quick Pico de Gallo and I crisped up the last few Corn Tortillas in Oil after cutting them in thin little strips. You can easily substitute some crumbled Tortilla Chops  It was so good! It came together in about 30 minutes and it was so delicious!

4 large Russet Potatoes (or up to 8 smaller Potatoes), peeled and cut into a dice

8 cups of Chicken or Vegetable Broth

4 Corn Tortillas, sliced into thin shreds (about 1/4 inch wide) with the larger lengths cut in half

While the Potato Broth is cooking, place the Chorizo in a small frying pan and cook until it is crumbly. Remove to a plate and wash and dry the frying pan.

Then add int he Vegetable Oil and heat. Add the Tortilla shreds, 1/2 at a time and cook until crisp. Remove to a paper cover lined plate and repeat until all are cooked. Reserve the Oil for another use.

Ladle the Soup into 4 bowls, dividing the Chorizo evenly between the 4 bowls and stir in. Then add in a big spoonful of Pico de Gallo and sprinkle a few of the Tortilla Shreds on top of each. Serve with the remaining Pico de Gallo on the side.

1/2 of a small Serrano or Jalapeno Chile, minced (equals about 1 Tablespoon)

Juice of one small Lime

Mix all the ingredients together in a small bowl and use as a garnish for the soup.

Soup as a liquid food, always belongs to the Water Element and the use of Pork Chorizo adds even more Water. However, the Red Chili Powder in the Chorizo also contributes the Fire Element, as does the Tomatoes and Serrano Chili n the Pico de Gallo. The main ingredient of the Soup is Potatoes, which brings in the Earth Element as do the Corn Tortillas. The Wood Element is represented by the Lime Juice and also the Chicken Broth  and a bit by the Cilantro too. The Onion adds in more of the Metal Element and the Butter and the Cilantro do too. This soup then is very balanced as well as begin delicious!