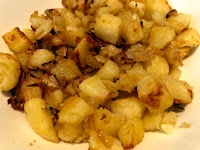 Potatoes and Onions are one of those classic food combinations that I love. Of course, I put them together often in many dishes - stews, soups, hash, etc.  But one of the ways I like to make them most is to roast them. The problem with roasting them together is that Potatoes take a lot longer to cook and by the time they are done, the Onions are usually burnt. This recipe solves that problem. Just roast them on separate sheet pans, remove the Onions when they are nearly done and then add them back when the Potatoes are done and crips them up together under the broiler for the last few minutes. The Roasted Onions will flavor the Potatoes wonderfully with only the hint of char on a few pieces of Onion from broiling them to finish them off. This is the perfect side dish and it's so easy to make and is incredibly delicious too!

Heat a pot of Water and add in the Potatoes when it is boiling. Cook for 10 minutes. Drain and place the Potato chunks onto a large sheet pan. Drizzle with 3 Tablespoons of Olive Oil, sprinkle with most of the Salt, toss lightly and place in the oven.

Place the Onion chunks on a smaller sheet pan and drizzle with the remaining Olive Oil and Salt. Please in the oven.

Cook the Onions until they are browned (but not charred), about 20 minutes. Remove from the oven.

Continue to cook the Potatoes until they are browned and crisp. Then take them out, add in the Onions and toss together.

Heat the oven to broil, put the Potatoes and Onions and cook for another 2 - 3 minutes or until late Potatoes get a bit more browned, but be careful not to burn the Onions. Serve immediately.