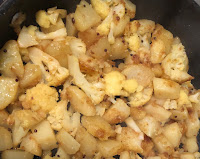 Since we are all sheltering at home (or should be), I would like to share some of my pantry recipes with you.  I've bought a lot of vegetables that keep well, mostly from the Cruciferous family - Cauliflower, Broccoli, Brussel Sprouts and several kinds of Cabbage. I also have a big supply of Potatoes, as I can't live without them!  I want to keep things interesting, so I am making foods from around the world and wanted to use some warming spices. Indian Food, in my opinion, is one of the countries that uses spices the best in combination. So, I pulled out some Turmeric, Coriander, Mustard Seed and Cumin and grated up some Ginger and minced some Garlic and I used them with Potatoes and Cauliflower. I don't use a lot of Spice, so you can certainly add more. And, you can also add in some Tomato and some Peas too if you like.

Cauliflower is one of the few Metal Vegetables and the Garlic, Ghee and Spices add even more Metal. The Potatoes and Ginger contribute the Earth Element and the Vegetable Broth made with Carrots and Cabbage adds a bit more. It also contains some Celery for the Wood Element and Tomato for Fire along with the Chili Powder, if you are using it. You could add some chopped Tomatoes and Peas too if you like and that would add some more Wood and Fire.  This dish should be served alongside some others that include more of the Wood, Fire and Water Elements so think of dishes like Eggplant or Fish for Water, Tomato or Lamb for Fire and some more Green Vegetables or Chicken for Wood to create a balanced meal.