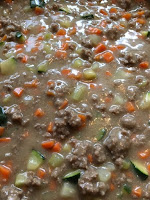 I was in the mood for pasta last night but did not want to make a Tomato-based sauce. I had read about a "White Bolognese Sauce" a while ago and have thought about making it but just didn't get around to it. Apparently when it was first published as a recipe in the NY Times, it cause quite a stir with Italians as the only true Bolognese Sauce must have Tomatoes. So, I decided to call it a White Ragu instead and of course, I used my own version of Bolognese Sauce to play with to make this white version. And basically,it includes everything that is usually in a Bolognese Sauce, minus the Tomatoes or course, and I added in some Zucchini because I wanted to up the vegetable quotient. Mushrooms would no doubt be good too, although I didn't have any on hand. I also used a Shallot instead of Onion and Garlic because it melts into the Sauce better. And I finished it with a small amount of Cream to make it unctuous. I'm quite sure this is authentic, but it did turn out to be a delicious gravy-like sauce that I really enjoyed so I'm sharing it with you. I served it with Gluten Free Spaghetti although next time I will probably use a small Pasta like Gluten Free Elbow Macaroni since I just ordered some. I will definitely be making this again because I loved it!

Heat Butter and Olive Oil until the Butter melts. Add in the Carrots, Celery, Shallots and Ground Beef and cook until the Beef is no longer pink. Add in the White Wine, Bay Leaf and Thyme and cook on at a simmer until it is mostly absorbed. Add the Bouillon Cube to the Boiling Water and stir to dissolve. Add into the Broth and Cream and taste for Salt. Simmer for an additional 15 minutes and serve over the pasta over your choice.  Serve with Parmesan Cheese on the side.

Beef belongs to the Earth Element and the Carrots and Zucchini add even more. The Metal Element is represented by the Whipping Cream, Butter, Thyme, Bay Leaf and Shallots. The Wood Element is present in the Celery and Olive Oil. And the Fire Element is represented by the Wine. Only the Water Element is a bit deficient so be sure to serve another dish that brings that Element in. Eggplant would be a good choice as an appetizer - in a dish like Caponata or think about serving dark berries for  dessert.