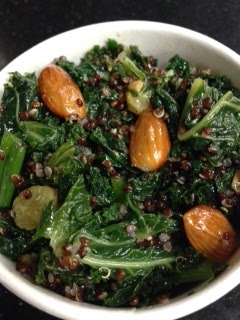 I haven't made a Kale Salad in a very long time. I think I was suffering from Kale overload.  But after eating so much for Chinese New Year, I had to lighten things up and I saw some fresh Kale at the grocery store while I was shopping for Chinese New Year and I had the urge to buy it. So I made a Kale Salad. But, I wanted a sweeter dressing so I made it with some of the many sweet Mandarins that I bought that are considered a lucky food. I combined the Kale with whole Almonds and plumped up Golden Raisins. I also threw in some already cooked leftover Quinoa because I already had it, but it would be just as good without it. However, Quinoa gives the salad some extra protein, which makes this a good make ahead lunch salad. The Mandarin Orange Vinaigrette was delicious and offset the slight bitterness of the Kale. The Golden Raisins added some more sweetness with a chewy texture and the Almonds gave it some crunch. It was so good!  Hope you enjoy it too!

Heat the Mandarin Tangerine juice in a small pot, take off the stove and stir in Golden Raisins. Let them sit for 10 minutes until they plump up. Then add in the Lemon Juice, Olive Oil, Dijon Mustard, Shallots and Salt. Stir to combine.

Wash the Kale and strip it from the center stem. Cut into bite size pieces and place in a bowl. Add in the Quinoa and the Almonds. Drizzle with the dressing and toss to coat.

Kale along with the Olive Oil, Tangerine and Lemon Juice all belong to the Wood Element. So this is a very Woody salad! The Raisins and Almonds contribute the Earth Element.  The Quinoa adds the Water Element since it is a seed and the Metal Element shows up with the Dijon Mustard and Shallots. The Fire Element is not present so be sure to serve another Fiery food as a main course or for dessert.