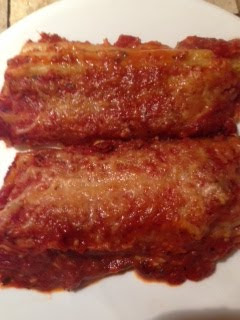 Today I'm posting something that I made but I didn't eat because it's full of Gluten and full of Cheese, but oh my it's delicious!  It was a special request from my son as this dish was one of his favorite foods when he was much younger.  He was a funny kid because he didn't like Pasta with Tomato Sauce except for Lasagna and Manicotti. If I ever served him Spaghetti, the only topping allowed was Butter and Parmesan Cheese and when he got older he added some Garlic Powder. So, this dish was something I made a lot and for some reason, I haven't made it in years. I remember that I got the original recipe from the back of the Manicotti box, but whatever kind of Manicotti that was, I couldn't find it in the store. So, I made it from memory and it turned out perfectly!

The Manicotti is boiled briefly and then stuffed with a mixture of cooked Ground Beef and Onions along with Mozzarella Cheese. I also remember leaving out the Parsley back then as any fleck of green wasn't allowed, but today I did add it in. And, I used the food processor to make the meat mixture finer as way back when, little pieces of onion were not allowed and I wanted to make it authentic to the original recipe. Once the Manicotti is stuffed, it is baked in Marinara Sauce and sprinkled with more Mozarella and later, some Parmesan. This dish can be made ahead and stored in the refrigerator or freezer until you are ready to cook it. Meat Stuffed Manicotti was one of my go-to dishes for baseball and soccer potluck dinners and it was always a big hit. If you freeze it, you just have to cook it longer.  My other son took some home with him and loved it too and he's the one who asked for the recipe.  This is also a great stuffing for big Shells and if you want you can change the stuffing to all Cheese - mixing Ricotta with the Mozzarella. But I was recreating a favorite meal from the past and my kids always loved them stuffed with meat. Oh I wish I could have eaten it - it smelled so good and apparently it tasted great too - just like my kids remembered!

Bring a large pot of Salted Water to boil.  Add in the Manicotti carefully. Bring back to a boil and cook for 7 minutes. Drain the hot water and refill the pot with cold water. Then remove the Manicotti to cool on a large sheet of Aluminum foil on the counter (big enough to cover an 11 x 13 inch glass pan).

In a large frying pan, heat the Olive Oil and add in the Onions, Salt and Ground Beef. Cook until the Ground Beef is just barely pink and remove from heat.

Place the 2 cups of grated Mozzarella Cheese in a food processor. Add in the Ground Beef and Onion Mixture along with the Parsley leaves. Pulse a few times until the mixture is blended. This step can be eliminated and the Beef and Cheese can be mixed together thoroughly in a bowl but I recommend using your hands to blend it. If you are using the food processor, be sure to remove the blade from the mixture.

Spread 1 cup of Marinara Sauce on the bottom of an 11 x 13 inch pan (or you can use two smaller ones). Pick up one Manicotti and place in your left hand facing up vertically and start to stuff the meat mixture into it, leaving about 1/2 inch open on each side. Place the stuffed Manicotti into the Marinara Sauce in the pan. Repeat until all Manicotti are stuffed. Then pour the remaining Sauce over the top. Sprinkle with 1 cup of Mozzarella Cheese. Cover with the aluminum foil. The Manicotti may now be refrigerated or frozen until ready to cook.

If cooking immediately, bake in a 350 degree oven for 45 minutes. Remove the Manicotti from the oven, take off the the foil and sprinkle on Parmesan Cheese and turn the oven to broil.

If baking previously refrigerated Manicotti, you may need to cook the Manicotti for an additional 5 - 10 minutes. Remove the Manicotti from the oven, take off the the foil and sprinkle on Parmesan Cheese and turn the oven to broil.

If baking a frozen Manicotti, place in a cold oven, turn the heat to 350 degrees and cook for 2 hours. Remove the Manicotti from the oven, take off the the foil and sprinkle on Parmesan Cheese and turn the oven to broil.

Return the pan back to the oven and broil for an additional 3 - 4 minutes or until the cheese is bubbling and beginning to brown. Serve immediately.

Pasta is made of Wheat so that brings in the Wood Element. The Ground Beef contributes the Earth Element and the Marinara Sauce brings in the Fire Element. The Cheese adds the Metal Element. Only the Water Element is missing so be sure to add in  something from this Element - I suggest a Lacinato Kale Salad with Walnuts to create a Five Element balance.