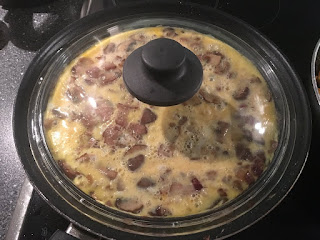 I'm in Germany right now after just having finished teaching and excited to finally start cooking some more exotic food now that I have some time. During my teaching days, I was often too tired to cook so I would go out but one night I decided to make dinner for breakfast - a family tradition. My friend Kelly suggested that I make a Fritatta that is part pan fried and part steamed rather than being partially baked in the oven. By covering the eggs with a lid while they cook, they puff up and become really tender. This is something she makes a lot and it was delicious! The best part was that I had some left over and a slice of it became the perfect breakfast the next morning with Toast.

Any number of ingredients can be added to a Fritatta - this is where you can use your imagination. We added Onions, Mushrooms and Bacon. Next time, I think I will add a number of green vegetables - I'm thinking of ingredients like Leeks and Spinach and even sautéed Zucchini. It was a wonderful dinner and a great way to make a Fritatta - thank you Kelly!

In a large frying pan with a lid, heat the butter until it is melted. Add in the onion and Mushrooms and cook until softened. Sprinkle with the Salt.  Then add in the Bacon and pour the eggs over.  Cover with the lid and cook for about 10 minutes on medium low heat until the Fritatta is firm on the top but still soft when touched with your finger. Cut into wedges to serve.

Eggs belong to the Water Element and the Bacon adds even more. So, this is a great dish when you are Kidney Deficient and tired.  The Onion contributes the Metal Element and the Mushrooms make sure that the Earth Element is represented. The Wood Element is missing, which is why adding a green vegetable like Spinach would be good and serve it with Toast and Tea or Coffee for breakfast and you will have a balanced Five Element meal.