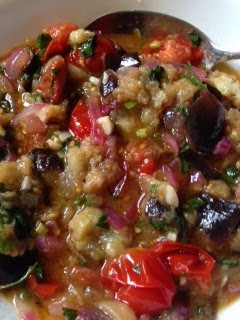 I was making grilled sausages tonight and was thinking about a salad with a Citrus Vinaigrette but I didn't have enough greens to make the usual. So, I pulled out two Eggplants and made a salad with them instead that was also a bit like a relish or a chutney. I cut the Eggplant into little pieces and roasted it and combined it with lightly sautéed red onion pieces and garlic so that they wouldn't be too strongly flavored and added some halved Cherry Tomatoes that I also cooked for just a few minutes. I used Lemon Juice and Olive Oil as the base of the dressing and I also included chopped Parsley, Mint, Cilantro and Scallion Tops. It turned out so wonderfully!  The Eggplant was creamy and the onions were still crisp. The Tomatoes melded into the Vinaigrette and the herbs made it taste really fresh. This salad paired perfectly with the Sausages and it was so delicious. I loved it!

In a small frying pan, add the remaining 1 Tablespoon of Olive Oil. Cook until the onion just becomes translucent and add in the garlic, stirring until you can smell the garlic fragrance. Add in the Cherry Tomato halves and cook for an additional 3 minutes or until the Tomatoes get a little soft and they start to form a little bit of sauce.  Remove and pour into a large serving bowl.

Then add in the Lemon Juice, Olive Oil, Salt, Sugar, Parsley, Mint, Cilantro and Scallions. Mix thoroughly to combine and add in the Eggplant. Stir to combine and let sit for at least 15 minutes to let the flavors meld before serving.

Eggplant belongs to the Water Element so that element is fully covered.  The Lemon Juice an Olive Oil contribute the Wood Element and the Tomatoes bring in the Fire Element. The fresh pungent herbs add the Metal Element. So, only the Earth Element is missing and that's easily fixed by making sure you serve a sweet dessert after the meal.