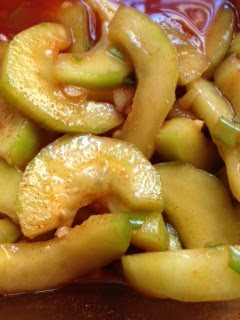 I was in the mood for some Cucumber Kimchi and didn't want to wait for several days to ferment some. And as you know from my previous posts, I hesitate to buy pre made Kimchi because it often contains dried shrimp. So, I took a shortcut yesterday and used Seasoned Rice Wine Vinegar along with Korean Red Chili Powder, Garlic, Green Onions and a bit of Fish Sauce and to make the dressing for a Quick Cucumber Kimchi Salad. I salted the Cucumbers first to get some of the extra moisture out or the salad would be watery and I did let the Cucumbers marinate for several hours in the refrigerator. Oh my, it was delicious!  I have to admit that I may even like it better than the Cucumber Kimchi. And I will definitely be making this again!

Place Cucumbers in a large bowl and sprinkle with the Sea Salt, mix well and let sit for about 20 minutes to get the moisture out.  Then drain, rinse with water and toss in the colander to remove all the excess water. Place in a serving bowl.

In a small bowl, mix together the Korean Red Chili, the Tamari, the Rice Vinegar, Fish Sauce, Garlic Cloves and Scallions. Mix well and pour over the Cucumber slices. Toss to mix. Refrigerate for several hours before serving. If desired, sprinkle with Sesame Seeds when serving.

Cucumbers belong to the Earth Element so that element is fully covered. The Garlic and Scallions bring in the Metal Element. The Tamari along with the Sesame Seeds contribute the Water Element and the Vinegar makes sure the Wood Element is also present. Finally, the Red Chili Powder is very fiery so the Fire Element is represented too. This then is a balanced Five Element salad!