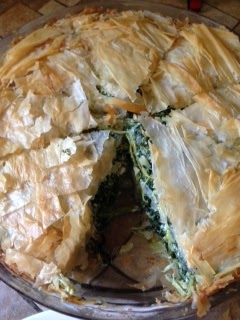 I had a request for my Spanikopita recipe from a friend, who had it at a party I gave last year. So I decided to go ahead and make it again so I could take a picture to post the recipe for her. I had Filo dough in the freezer, as I usually do, but this time it came out in pieces so that the crust had to be layered. It came more delicate that usual and I decided that I like it better this way so I am going to give up trying to make perfect Spanikopita from now on. Many of you probably eat these as little appetizer triangles, but I actually like it best as a pie. Actually it is a cross between a pie and a quiche.  It looks much harder to make than it is - it literally takes just minutes to put together and then you just pop it in the oven until it is brown. It is so delicious!

Cook spinach until wilted and drain it.  Squeeze out extra liquid.  Then, heat the butter in the pan and sauté the leeks until soft.  Add spinach to scallions and add parsely and dill – sprinkle with salt and pepper.  Using a wooden spoon, stir in the feta and the eggs.

Now assemble the pie. Butter the 9” inch round pie pan. Then spread 6 filo sheets, brushing each with butter, letting the extra hang over the sides. Put in the spinach mixture and bring the filo over the top. Then take remaining filo dough in big strips and lay on top (buttering each one as you go). Tuck the extra filo down the sides or fold under on top. If the filo stays intact, you can cut several steam vents with a sharp knife.

Bake for 35 - 45 minutes or until the top is golden and flaky. Cut into 8 pieces and serve warm or cold.

Spinach belongs to the Wood Element and the Filo adds even more as it is made from wheat.  The eggs add the Water Element. The Feta cheese, green onions, leek, dill and parsley contribute the Metal Element.  This dish is missing the Fire Element, which is easy if you serve it with tea or coffee or something else spicy.  And it is also missing the Earth Element, so serve something sweet later to create a Five Element balance.