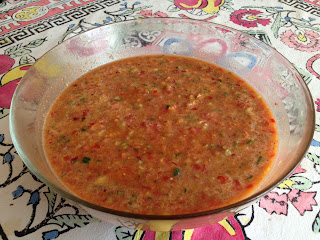 I have clearly been posting more than usual as I was housebound taking care of my mother during her most recent health crisis.  But, now that I am home, I'm still cooking! I  came back and discovered all the food that I had bought before I left desperately needed to be used up and I decided to throw the tomatoes and peppers and cucumber and onions together and create one of my favorite summertime treats - Gazpacho soup. This is a Spanish soup clearly designed to use up tomatoes and the most important thing about making it is to use really ripe tomatoes. Also, in the interest of being authentic, I like to use Sherry Vinegar and olive oil from Spain as they have their own distinctive tastes, but if you don't have them, any fairly mild wine vinegar including White Balsamic will work, but make sure it is not too sour. I much prefer  a chunky texture so I don't puree the soup very much so that the vegetables shine through. But, you can certainly make this soup smoother if you want. This is a wonderfully refreshing soup and very nutritious too!

Combine everything in a large bowl and stir to mix.  Take ½ the mixture at a time and put into a food processor or blender and blend into small chunks.  Pour into a covered container and refrigerate for up to 4 hours to blend the flavors.

Tomatoes belong to the Fire Element and so do the peppers, both sweet and hot – Cayenne so this is primarily a Fiery dish.  The Vinegar and Olive Oil add a bit of the Wood Element and the Cucumber contributes some Earth.  As it is a soup, it is intrinsically part of the Water Element although this element needs some support and the Metal Element is missing. So serve this with some fish or shellfish cooked with herbs as we did or if you want to go lighter, consider making a creamy dessert with some Water fruits to create balance.