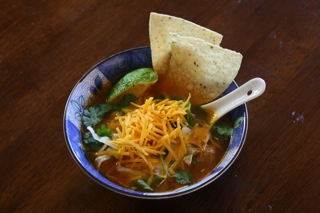 It's getting chilly here, especially at night and so it's time to bring out the soup pot.  I got a special request from my sons for Pozole tonight, which is a Mexican pork and hominy soup that's really warming from all the chilis and nourishing from the pork bones.  I think my kids have always liked it because there are so many things they can add in - tortilla chips, cilantro, cheese, radishes and a squeeze of lime. You can also add in extra chopped raw onion, but they usually pass on that but they do like to add extra hot sauce as I use the milder version of the New Mexico Chiles.

I first had Pozole in Albuquerque, New Mexico after having driven through a snowstorm to get there. It was so delicious and I had a craving for it for years after. I didn't even try to make it until I found a recipe in Gourmet Magazine about 12 years ago. Something about it just felt right and I tweaked it over the years until I came up with a version that suits us perfectly.  It's become a family favorite soup and is great for company and I've served it many times to my students when they come to study with me.  This ends up being one of the recipes many of them take home.  You can also make it ahead of time as it freezes really well.

Soak the New Mexico Chilis in boiling water until soft - do not drain. Pull off stem end and place the chiles with the soaking liquid into a Cuisinart or blender with the onions.  Puree until smooth.

Place pork in a large pot and add diluted chicken broth and the garlic cloves.  Bring to a boil and reduce heat. Skim the foam off as it rises. Cook for 1 1/2 hours or until the pork is very tender.  Remove pork from broth and cool, then remove from the bone and chop into pieces about the same size as the Hominy.  Strain broth and clean the pot and return broth to the pot.  Add the Chili Puree and the Oregano and salt to taste.  Add Hominy and bring to a boil.  Serve with the add-ons listed above.


Pork belongs to the Water Element and as a soup, this definitely qualifies as a mostly Watery food.  The chicken broth brings in a bit of the Wood Element as does the Cilantro leaves and lime.  The Red Chiles and lettuce bring in the Fire Element and the Earth element is covered by the Hominy and Tortilla Chips.  The Metal Element is represented represented by the onion, garlic and radishes and the cheese.  This soup ends up being a perfectly balanced Five Element soup!