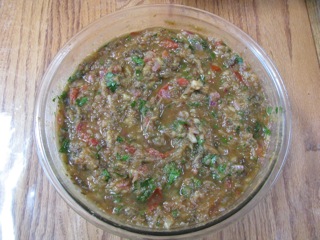 I made this dip for my friend's party and wanted to share this recipe too as it turned out so well.  I've made it many times before as I love all kinds of eggplant dips, but I never really liked how grey eggplant dips look so this time I added tomatoes and I love the way it brightens up the color.  The cilantro and parsley help too.  This dip is better if made ahead as it gives time for the flavors to meld.  I actually made it two days before and it was wonderful.  I served it with Pita bread cut into triangles and gluten free crackers.  It was a big hit and I will definitely add the tomatoes when I make it again.

Toast cumin in a dry 10-inch heavy skillet (preferably cast-iron) over medium heat, stirring occasionally, until fragrant and dark brown (be careful not to burn). Roast a whole eggplant in the oven on 450 degrees turning frequently with tongs, until blackened and tender and collapsing.  Take out of the oven and put on a cutting board and cut off and remove the stem. Scrape flesh from skin and coarsely chop the eggplant. Toss with onion, tomato, vinegar, sugar, 1 oil, parsley, toasted cumin, and 1/2 teaspoon salt. Dip can be made ahead up to 2 days before - store in the refrigerator.

Eggplant belongs to the Water Element, while the red onion and cumin bring in the Metal Element.  The Fire Element is represented by the tomatoes and the Wood Element is brought in by the vinegar, olive oil, parsley and cilantro and the Pita bread.  It is nearly balanced.  Only the Earth Element is a bit lacking as the small amount of sugar doesn't add much so be sure to serve this with another Earthy food to create balance. I served it before the main meal, which included beef meatballs, which are Earthy and a Chickpea Tagine that contained a lot of Butternut Squash and Zucchini.