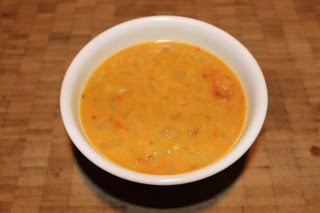 It's snowing here in Seattle - a lot.... We are actually snowed in. And when it's that cold outside, I just naturally start cooking more and more soups as they are so warming. Plus my son just got home from a trip to Bali and he's not feeling well. After chicken soup, his favorite soup is some version of Dal. So, I made this soup for him last night. This particular version is made with red lentils and coconut milk. It is creamy and rich and redolent of Indian spices - cumin, coriander and turmeric. It's so nourishing and so soothing. And, it can be easily doubled if you are serving a crowd. So, if you need some comfort during this cold spell, try this soup!

Put lentils in a medium saucepan with the 2 cups water and the coconut milk. Add 1/2 of the onion and chopped tomatoes and turmeric, ground cumin and ground coriander (and Serrano Chili if using). Bring to a boil, reduce heat and simmer for 25 - 30 minutes (stirring occasionally) until lentils are soft. Add the extra water 1/2 cup at a time if the mixture gets too thick. Heat ghee in a frying pan and add cumin seeds, mustard seeds. Cook for just a few seconds then add in onions. Cook over medium heat until onions are golden brown. Put onions in with the lentils and cook for an additional 5 minutes. Add salt and pepper to taste. Serve with basmati rice.

Soups are always considered a part of the Water Element style of cooking, but this one is thick and creamy and that makes it a little more Earthy. Lentils belong to the Earth Element too so that element is covered. Coconut milk and the spices contribute the Metal Element and the rice adds even more. The Cayenne Pepper brings in just a bit of fire, so if you want more, use the Serrano Chili or go heavier with the Black Pepper. The Wood Element is missing, so consider serving this soup with a green vegetable to create a Five Element balance.