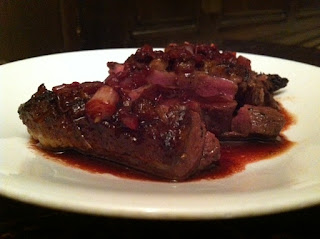 I love duck, but I have to admit that I never made it at home before. It's a rather newly acquired taste as I never even tried it as a child. My mother didn't like it at all and I wasn't allowed to eat it at Chinese banquets. But, here in Seattle, there used to be a great Thai restaurant that had Duck noodles and that got me loving duck. Since then, I have Peking Duck whenever I can and I've discovered that they serve great duck in Europe, particularly in Germany. I was at a restaurant there last year and had a wonderful duck breast with a sour cherry sauce that I decided to recreate. And, on my first try, I was so delighted with the results that I am sharing the recipe with you! I seared a large duck breast (cut in half) skin side first to crisp it up and then a bit longer on the other side so it came out mediumish. I don't like duck too rare. Then for the sauce, I cooked some shallots in butter and I used some sour cherry preserves from Germany (there are several good US brands - like Stonewall Kitchen - even Smuckers has one) and then mixed the preserves with a little balsamic vinegar. I thought it was divine. The only downside is that the sauce looks a bit like blood, but one taste and I think you will be hooked too. I served it with smashed potatoes and some steamed green beans. I was very happy with this recipe and so was my son who loves duck more than me. And it cooks fast. I hope you will try it soon!

Score the skin of the duck into a diamond pattern and be careful not to cut too deeply. Sprinkle with salt and pepper on the skin side. Heat a large skillet to medium high. Add in duck breasts skin side down and cook until the skin is browned and crisped. This will take 5 - 6 minutes. Salt and pepper the fleshy side and turn over. Cook for about 8 - 10 minutes longer on medium heat. Take the duck breast pieces out of the pan and let them sit while you make the sauce.

Pour off all of the fat and add 2 Tablespoons of butter into the pan. Add in shallots and cook until they become translucent. Mix together the Preserves, vinegar and chicken broth - taste and adjust for sweet and sour mix and add to the pan. Cook until the sauce reduces slightly - up to 5 minutes. Slice the duck and pour sauce over to serve.

Duck belongs to the Water Element so that element is covered. Balsamic Vinegar add the Wood Element. Sour cherries contribute the Fire Element and the shallots bring in the Metal Element. Only the Earth Element is missing for balance, which is why this dish is so good with potatoes and/or green beans.