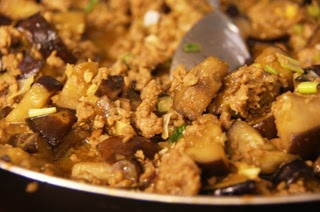 This is a very famous Szechuan dish that is usually called "Fish Flavored Eggplant." Now there is not fish in this dish and what the name actually means is that this is the seasoning blend that they use in the Szechuan province to cook fish. It is one of our family favorites, although I have to admit that I can't take it when it is too hot. I like to add a little more meat than most people 1/2 lb instead of 1/4 lb and I like the eggplant chunks to be slightly smaller in size - about 1" chunks instead of longer pieces. I just think they are easier to eat that way. The usual seasoning involves Chili Bean Paste, but I have always preferred Chili Garlic Paste (I use Lee Kum Kee) as I think it tastes cleaner, but the bean paste is more traditional. If you don't have those, you can also substitute a teaspoon or more of chili flakes. It is also quite common to use Szechuan Peppercorns, which up until now were quite hard to get. But, these are something you will either love or hate. They numb your lips and tongue so you have to like that feeling - otherwise it is much better if you don't use them. Be sure to serve this dish with lots of white rice - especially if you make it hot.

2 Tablespoons Soy Sauce
2 teaspoons Chili Garlic Sauce or Chili Bean Paste (add more if you like it hot)
½ teaspoon sugar
¼ teaspoon Black Pepper
1 Tablespoon Black Chianking Chinese Vinegar (can substitute Balsamic)
½ teaspoon Toasted Sesame Oil
¾ cup chicken broth
2 teaspoons cornstarch
Optional:
Cilantro leaves for garnish
½ teaspoon ground Szechuan Peppercorns put in when the green onions, garlic and ginger are put in. (this is quite numbing and some people really dislike the feeling so be careful about adding it unless you know you like it).

Heat a large wok or frying pan and add in 2 Tablespoons of oil. Put in eggplant and stir-fry until it just begins to brown and is softened – about 5 minutes. Remove to a plate. Add 1 Tablespoon of oil and put in garlic, onions and ginger and stir until you start to smell the fragrance. Add in pork and stir to separate meat and cook until it is no longer pink. Add in the sauce and the eggplant and cook for another 3 minutes. Add in cornstarch mixture and cook until the sauce thickens – about 2 minutes. Pour onto a serving plate and garnish with cilantro leaves. Serve with lots of steamed white rice.

Eggplant and pork both belong to the Water Element as does the Soy Sauce and Sesame Oil so that element is covered. The vinegar and chicken broth adds the Wood Element and the Chili Sauce, black pepper and Szechuan Pepper (if used) contribute the Fire Element. The Metal Element is brought in by the white rice, the green onions, ginger and the garlic. The only element that is missing is Earth so another dish that uses an Earth vegetable like cabbage or a dish with sweet sauce or a fruit dessert would balance out the meal.