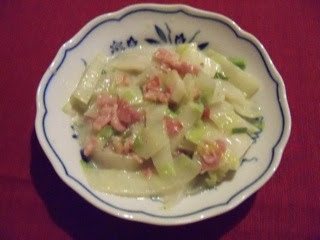 The Chinese are known for being economical about food. They rarely like to waste things and find interesting ways to use up what's left from cooking another dish. As a child, I made a lot of Jaozi or pan fried dumplings - in fact I can wrap them with eyes closed and I'm fast! One of these days I'll post my grandfather's recipe. His Jaozi were made with pork and Napa cabbage, but he favored using the upper part of the leaf as it made the dumpling filling softer. So, there was always a lot of the Napa Cabbage stalks left over and that's when he made Chinese Creamed Cabbage.

The Chinese use very little milk or cream in their cooking and it is not something they enjoy very much, primarily because many of them are lactose intolerant - including me. However, my grandfather became a big fan of coffee in the morning and discovered that whole cream had very little lactose. So when he made Chinese Creamed Cabbage, which is a Shanghai specialty, he only used real cream. If you make this dish with milk, just be sure to use whole milk but it won't be as creamy and I don't think it is as delicious. The Napa Cabbage stalks hold up well to the cream sauce and have a delightful crunch and the dish is seasoned with salty ham and green onions. Of course, you can use the the upper leaves as well as the crunchy stalks, but this is the way I grew up eating it and I like it much better. And, like my grandfather, I use the tops for dumplings. The traditional ham we used in the US was Virginia Ham, but Southern Country Ham also works and in a pinch bacon is also good. This is a simple dish and quite loved by my kids. It's also been a big hit when I have brought it to parties.

Heat wok or frying pan and add oil. Put in the white part of the green onions and the ham and stir a few times. Then Napa Cabbage and stir fry until the cabbage wilts slightly - about 2 minutes. Add in the chicken broth and cook until the cabbage is soft - about another 3 minutes. Meanwhile, stir cornstarch into the cream and add to cabbage mixture and stir until it thickens. Taste and add pepper and salt if necessary. Sprinkle dish with the remaining green onions, stir in and then serve.

Napa Cabbage belongs to the Earth Element, whereas the salty ham adds the Water Element. The chicken broth contributes the Wood Element and the cream and green onions add the Metal Element. Only the Fire Element is missing and the Black Pepper brings in just a bit, but to balance this dish, it would be good to serve a Fire meat like lamb or to have another spicy hot dish to go with it. Then the creaminess of this dish will offset the heat of the other and that is very balanced eating!