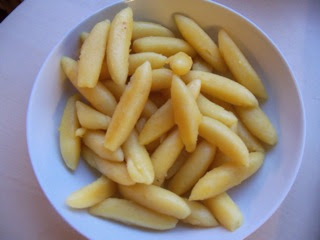 Did you ever notice how so many cultures make very similar foods but call them different names? The more I travel, the more I see this. Of course, when countries are close together, it would make sense that they would make similar foods as they grow the same kinds of crops. But even acrross the world, there are similarities in food preparation. For example, aren't Ravioli the same thing as Wontons, Momos or Maultaschen? Yes the fillings are slightly different, but all have a noodle dough. If you don't know what any of these foods are, I'll be making them all one of these days as I have an obsession with wrapped and stuffed foods and also with noodles.

So, in the interest of learning more about German food, I was given recipes from some German friends for a few traditional Swabian foods. The one I got most intrigued by at first glance was Schupfnudeln or these cute, fat little potato noodles that to me are just like Italian Gnocchi only shaped differently and served with other kinds of sauces. Apparently, they are also called by a name that refers to little boys' private parts but I won't be giving you that one! This name comes from the back and forth rolling motion that you use to shape the noodles. This recipe was one of those that you have to use your own judgment about in terms of how much flour to use. That's because different kinds of potatoes have differing levels of moisture. The only do ahead part was cooking the potatoes the day before, but I already had made extra potatoes when I baked some actually a few days before. And you do have to be a little careful not to the dough too wet or it will fall apart when you cook it so test one first and add more flour if necessary. Or, if you make it too dry - you can add another egg and some more flour.

But other than that, Schupfnudeln were actually very easy to make and if you like chewy noodles, you will love these. I browned them in butter and served them along side some pork chops with a little bit of pan sauce and a green salad. But they would be just as good with pasta sauce and another German way to serve them is to mix a few eggs and some cream and pour it on top of the noodles and bake it until it is browned - Hmm - that sounds rather like a cross between a Carbonara and Alfredo sauce if you just added some Parmesan cheese. I haven't tried that version yet and I'm sure it is good - I'll let you know how it turns out when I do. What I did was brown the Schupfnudeln only a little bit as I was in a hurry, but next time I will brown them a lot more. - the crispy bits were the best and really contrasted with the chewy texture.

Peel the potatoes and mash in a bowl. Add salt, nutmeg and 1/4 cup of flour at a time. Knead together until it just holds together.

On a floured board, Take about a palmful of the dough at a time, roll into a snake and cut into 1 inch pieces. Then take each piece and roll into small noodles about 1 1/2 inches long and about 1/2 inch wide with the ends slightly pointed - or about the size of a small little finger. Boil the noodles into the water until they rise to the surface. Drain them and put into a frying pan with melted butter and cook until crisp.

This is not going to be balanced as it is a side dish but it represents the Earth Element best as potatoes belong to that element. The wheat flour adds in just a bit of Wood and the eggs bring in some of the Water Element. Browning them makes them a little Fiery and the nutmeg adds a teeny bit of Metal. If you cooked these with the cream, you would bring even more Metal in. But serving Schupfnudeln with a meat dish and some vegetables would definitely be a good idea to make a balanced meal.