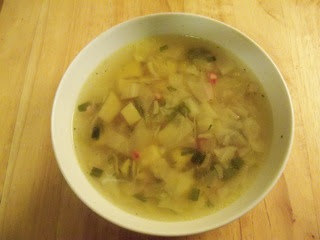 In honor of St. Patrick's Day tomorrow I used some classic Irish ingredients - bacon, potatoes and cabbage to make a soup. Bacon is actually a more common food in Ireland than Corned Beef and I don't know where to find Corned Beef here in Germany and didn't want to spend the five days needed to cure it myself. Besides that, I've been stressed from writing and didn't feel like shopping and these ingredients were in the fridge. So I improvised. I used a base of chicken broth - I made a lot of broth the other day from a soup chicken (very popular) here in Germany. Then, I cooked up some bacon and green onions and cut up some potatoes and cabbage and let it simmer with a bay leaf. It cooked for only 1/2 hour and it was delicious. So simple - why do people think soup is so hard to make? It was soothing and savory and would be perfect with some soda bread. But, I served it with some baked pretzels as I had some in the freezer. That made it more a German soup, I suppose as these ingredients are common here too. If I had used Chinese ham (or Virginia Ham) and noodles instead of potatoes, I would have had a classic Chinese soup. You could use a chopped onion or leeks instead of the green onions too. Like most soups and stews, it may even be better the next day so I plan on eating the rest tomorrow. Soup is one of the most nurturing foods in the world and I think we should all eat more soup - your kidneys will thank you if you do! Try this if you need a fast, easy and delicious soup.

Put chicken broth in a large pot on stove and heat to boiling. In a frying pan, cook bacon until the fat is released and add in the green onions (or onions or leeks) and cook until they just wilt. Add it to the broth along with the cabbage and potatoes and the bay leaf. Bring to a boil and and reduce heat to simmer. Cook for 30 minutes. Taste and season with salt and pepper.

Soup by its very nature is a Water Element food and this soup has even more Water as bacon is a salt cured meat. The cabbage and potatoes add the Earth Element and the green onions bring in the Metal Element as does the bay leaf. Fire and Wood are missing so to balance this meal, you might want to serve it with beer for some Fire and/or some berries with cream (for the Metal Element) for dessert. Doesn't that sound good?