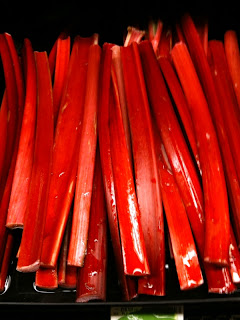 I'm apparently stuck on the color red right now as yesterday I bought rhubarb, strawberries, apples and red peppers and even red Thai bird chilis. I passed on beets only because I just made so much beet soup last week. I love when rhubarb comes in season. It's such a curious food that at first glance looks like red celery. I never imagined it would make a good desert as it is incredibly sour when raw. But when you add a little sugar, it can become a magical desert with that wonderful tartness that's a lot like cherry pie. It's often paired with strawberries in pie and some people even pair it with apples.

I'm not often in the mood for sweets that are too sweet, so if you are like me, you will really enjoy this desert. It's also really simple and easy to put together and it's Gluten Free. My sons like it with vanilla ice cream but I have it just plain. I especially like it for breakfast the next morning - who says you can't have desert for breakfast?

Preheat oven to 350 degrees in an 8x8” lightly buttered baking dish. Combine rhubarb with sugar, cinnamon and salt in the baking dish baking dish. In a separate bowl, cream butter, oats and brown sugar together. Sprinkle topping over rhubarb mixture and bake for 40 minutes.
Serve warm with whipped cream or vanilla ice cream if desired.

As red as rhubarb is, it is pretty easy to tell that it is from the Fire Element. The oats and sugars add the Earth Element. There is just a bit of cinnamon that brings in the Metal Element. There's not enough salt to add much Water and there's nothing representing the Wood Element so it's obvious that this is not a very balanced food by itself, but would add a lot to a dinner that's deficient in fire and earth.