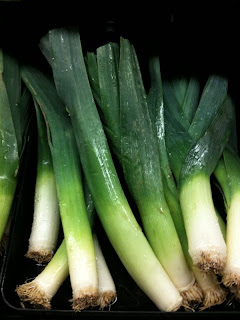 I've been quite tired this week and feeling a little under the weather - literally - as it was raining quite hard and as you will come to know - this is always when I make soup. Something creamy and soothing was what I wanted, but I didn't want to use a lot of cream or milk. That's where potatoes come in as they can create that lovely creamy texture without the extra fat. Not that I mind fat - I like it a lot! And, I think it is quite necessary especially when it is cold outside. I just like to leave room for the option of bringing more fat in my diet on purpose!

I had some leeks left in the refrigerator from the pizza I made last week (see previous post) and I wanted to use them up - that's the thrifty Pennsylvania Dutch (German) side of me coming out. So I immediately thought of making one of my favorite creamy soups - Potato Leek. It's an easy soup with very few ingredients. I like to use chicken broth as the base and I add shallots for depth of flavor. I was once told by a professional chef that shallots were the secret ingredient in many restaurant sauces and they are one of my staples. I love to garnish this soup with bacon bits along with chives when I serve it. If I'm making this for my vegetarian friends, I use soy bacon bits and I change to vegetable broth. It's very good that way too. I hope this soup nurtures you as much as it does me! 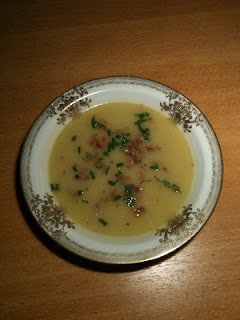 Cut the top 1/3 of the leeks off - the dark green part (you can save this and use it later for stock). Cut leek in half and then slice in 1/8 inch slices. Rinse thoroughly to remove all dirt. Peel potatoes and cut into ½ inch chunks.

In a soup pot, melt butter and then add shallot and leeks and cook over medium low heat for about 5 minutes or until softened. Add in potatoes and cook for another 5 minutes being careful not to brown them. Add chicken stock and bring to a boil. Reduce heat and cover. Simmer for about ½ hour then check to see if potatoes are tender.

Using a stick blender, puree soup until smooth. You can also use a blender if you blend in small batches or a food processor but it is much easier if you blend it right in the pot. Taste and adjust salt and add pepper. Ladle into bowls and sprinkle on bacon bits and chives.

Soup is inherently the Water Element as is salt, but the use of chicken broth as the stock (which comes from bones which is also watery) adds the Wood Element. Leeks and shallots are part of the Metal Element as are all of the Allium family so the chives bring in even more Metal. and so does the simple act of garnishing. But the way the leeks and shallot are cooked make them much earthier. The potatoes increase the Earth Element and the pepper brngs in just a hint of Fire. Overall, it's a rather balanced dish by itself but as part of a meal, something with more Fire would be good and I would recommend a salad.