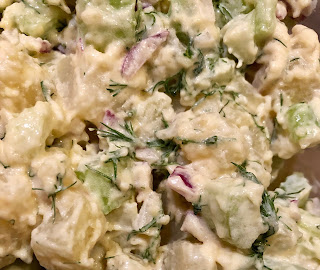 I've been having some fun with the unexpected substitutions that I've been finding in my grocery orders. And yesterday, I received a really big bunch of Dill, which was apparently a substitution for Parsley. Now I love Dill, but I certainly didn't need that much and I've been thinking about the different ways I could use it. Of course, I could make my Tuna Salad with Dill and I could also make an Herbed Tahini Dip. But, because I had Salmon for dinner, I decided to make a Dill Potato Salad. Dill is wonderful with Seafood of all kinds, but it's not usually something I add to my Potato Salad. But I did have a wonderful Dill Potato Salad at a Potluck a few summers ago. However, it contained Sour Cream and since I don't do dairy, I never tried to make it myself until today. I wanted to replicate that tangy flavor in a dairy free version.

So, I used two kind of Mayonnaise combined that are a bit tangy - Sir Kensington and Kewpie Japanese Mayonnaise. Both are very rich because they are made with Egg Yolks and both are delicious. But, if you don't have either one of those kinds of Mayonnaise, just use what you have but add a splash of Vinegar. I also added in some Dijon Mustard, a little Salt, a bit of Sugar, some Celery and Red Onion and of course Dill. I thought about using some Green Onion and I may try that next time. I added in some Dill Pickles for extra crunch.  I made it earlier in the day so that the flavors would meld and so it would be ready when the Salmon was cooked. I was so pleased with how it turned out and it was absolutely delicious! I think this is an especially good Potato Salad to accompany a Seafood Dinner and I'm thinking that it might be a good idea to add in chunks of the cooked Salmon so I can have it for lunch tomorrow.

6 small to medium Potatoes, washed (equals about 4 cups when peeled and cut up)

Place the Potatoes in a pot and cover with Water. Bring to a boil and reduce heat to a simmer and cook for 30 minutes. Remove and cool slightly and then peel with a paring knife. Cut into small cubes and place in a mixing bowl. Add in the Celery, Onions, Dill and Pickles.

In another bowl, mix together the Mayonnaise, Mustard, Sugar and Salt. Stir to combine and then add to the Potato mixture Toss to coat the Potatoes thoroughly Place in a covered container in the refrigerator until ready to serve.

Potatoes belong to the Earth Element, but the Celery brings in the Wood Element. The Red Onions and Mustard contribute the Metal Element and the Dill adds some more since it is a pungent herb, but it also considered part of the Wood Element since it is a green herb. The Pickles add even more Wood. So, this really is a good side dish to Seafood, which is from the Water Element and make sure that there is a dish that contains the Fire Element to with the meal too, like a lettuce salad or a red fruit dessert to create balance.