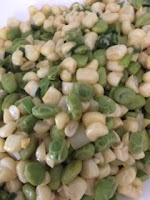 I haven't been posting much since I've been working so hard on my cookbook - due out later this year. Testing recipes over and over again kind of takes away the time and creativity I need to develop new recipes but I will be done soon and I'll keep you posted. about the release date!

In the meantime, here's something I whipped up tonight when I wanted some protein from a vegetable source. I had three ears of Corn in the fridge that needed to be cooked and I found a container of already cooked shelled Edamame from Trader Joe's. If you can't find this particular product, look for Edamame in the shell and cook following the package instructions and then peel them. I cooked the Corn, cut it off the cob and sautéed it in Butter it with some Green Onions and the Edamame. I added some Tamari too and it was so good!  My son said he was going to add some Sriracha to his, but he gave a thumbs up to the dish, which means he will definitely eat it again.  I served it with a Green Salad with lots of other cut up vegetables. This dish a really quick and easy to make when you have so many other things to do and it's delicious!

Bring a pot of water to a boil and add the fresh Corn. Cook for 5 - 7 minutes and remove. Cool and cut the Corn off the Cob.

Melt the Butter in a frying pan over medium high heat. Add in the Green Onions and cook until you can smell the fragrance strongly. Then add in the Corn and the Edamame and sauté for 4 - 5 minutes or until the Corn and Edamame are hot. Then drizzle on the Tamari and toss to coat.  Serve immediately.

Corn belongs to the Earth Element whereas the Edamame is partly the Water Element because it's a bean and partly the Wood Element because they are green. The Tamari brings in a hint of the Water Element and the Butter and Green Onions contributes the Metal Element. For a balanced meal, serve it with a Fire food, as I did with a Lettuce Salad with Tomatoes and Red Onion pieces (more Metal) and dressed it with Lemon Juice and Olive Oil  (Wood foods) to balance things out.
Posted by Lillian at 6:09 PM