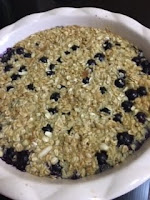 My friend Kelly is visiting over the holidays and today we made a breakfast dish that I wanted to share with you - Baked Oatmeal.  I read about it on the food website, Serious Eats and wanted to try it. But, I decided to change up the ingredients, using Blueberries and Almonds and Almond Milk instead of Apples or Bananas, Walnuts and regular Milk. I also left out the Brown Sugar on top as I wanted just he flavor of Maple Syrup. I was really impressed with the way it turned. I love the texture - the oats weren't mushy and the blueberries didn't burst. A subtle almond flavor permeated the dish and it was delicious!. Thank you to Serious Eats. This is definitely a breakfast dish I will make again!

Preheat oven to 350 degrees.  Lightly grease a pie pan with butter or oil. Put oats, almonds and blueberries in the baking dish. IN a mixing bowl, stir together the Maple Syrup, Salt, Cinnamon, Egg, Almond Milk and melted butter.  Pour into the baking dish.  Gentry stir the mixture. Bake for about 30 minutes or until the center is set and top is very lightly browned Serve with additional Maple Syrup

Oats belong to the Earth Element and since this is a sweet breakfast dish, it is primarily Earthy and the Almonds and Maple Syrup add even more. The Blueberries and Egg contribute the Water Element.  The Cinnamon gives a tiny hint of the Metal Element but the Almond Milk adds more. The Wood and Fire Elements are not present, so be sure to serve this with some Orange Juice for Wood and Coffee or Tea for more Fire. I also served Bacon for more of the Water Element.