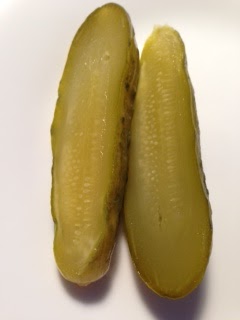 When I was going to UCLA, I used to stop at this little country store on the way home in the Canyon and buy Dill Pickles. Later I spent a lot of time at Art's Deli and my favorite thing there was the Half Sour Pickles. I would order a lot so I would alway be able to take some home. I once made my own years ago and loved them and kept that recipe, which I just found. So I went and found some small little Kirby cucumbers at my local PCC Market. I grabbed a bunch and made the pickles straight away. The recipe was a newspaper clipping from long ago and I believe it was from the LA Times so I will give them credit. I altered it a bit to make these and was very pleased at the result. They only took 3 days to make and were just like Deli Pickles the first few days after that. Then I left them in the fridge to go on a trip and came back and they were like the barrel pickles I used to buy. I forgot to photograph until this stage, so that's what you are seeing in the photo.  I love them both ways and fermented foods are so good for me that I plan on making my own pickles from now on!

Soak the cucumbers in a bowl of water while making the brine.

Bring water and salt to a boil. Cool down until just warm and add in the Dill Seed, Whole Peppercorns and Pickling Spices.

Pack a large jar with the cucumbers and wedge them in tightly. Drop in garlic cloves and Jalapeno pieces (if using). Then pour the brine over the pickles.  Cover and leave on the kitchen counter for three days – opening the jar at least once a day. Serve after the third day and refrigerate from that point on. They will still be quite crisp the first few days and then they will get softer and more sour over time.

Pickles by their very nature are sour, so they are considered first and foremost a Wood Food. But because they are pickled in salt water, there is quite a bit of the Water Element present.  Cucumbers in their original state are an Earth food so that Element is present a little as well.  The Fire Element is present if you use the Jalapeno Pepper and the Metal Element is present in the Garlic and the Spices. No one would ever expect Pickles to a balanced food, but they are more balanced little snack or condiment than you think!