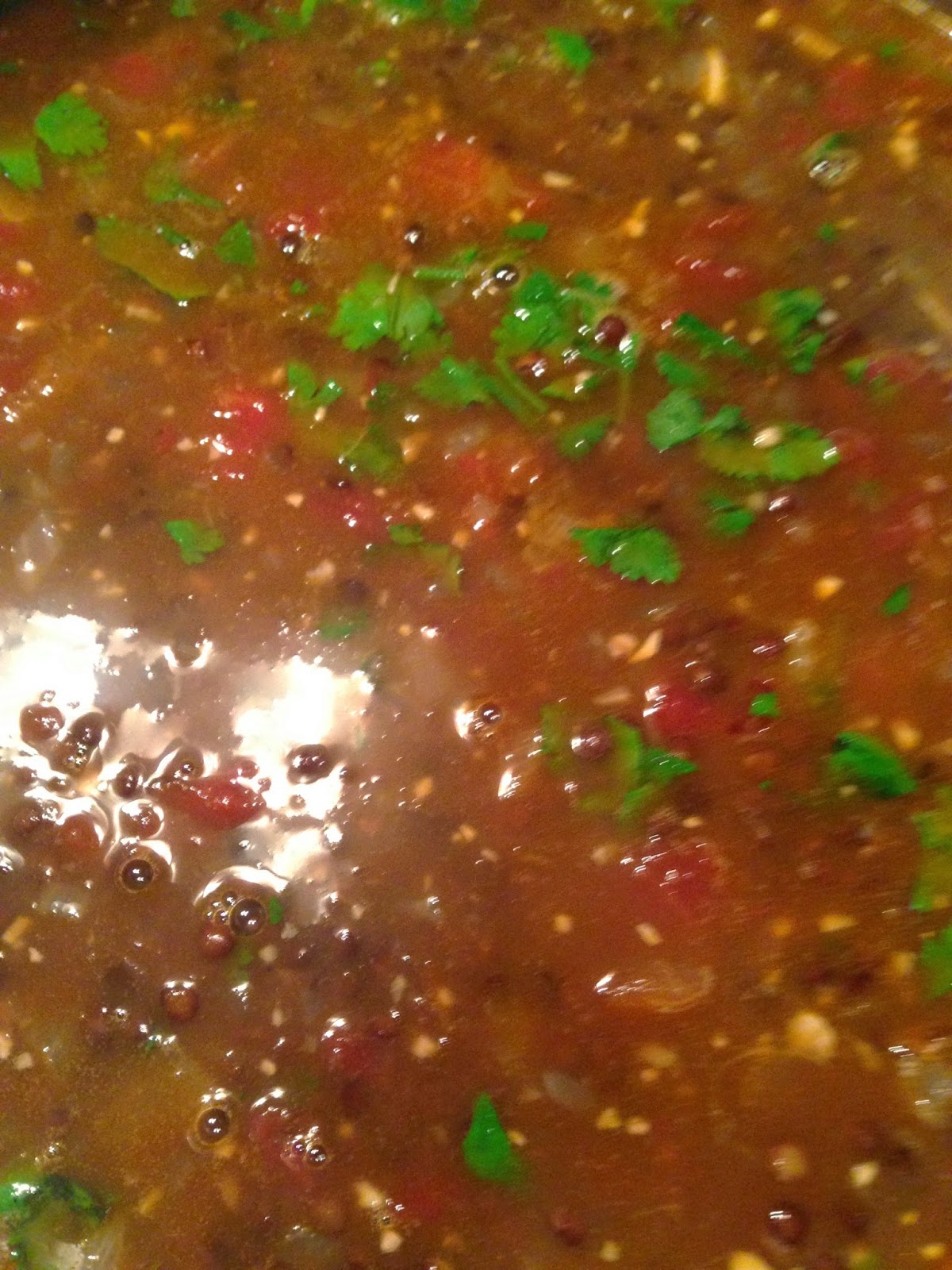 You know those days when you have no idea what to cook? It's times like that when I get the most creative, as I have to mine my pantry and refrigerator vegetable drawers to create dinner. Last night, I had completely forgotten to prepare anything, I looked over at my jar of beautiful little Black Lentils and thought that it was time to use them. They are very tiny and are often called Beluga Lentils since they look so much like Caviar.  Lentils are part of the Pulse family and are high in protein, iron and other minerals too. They are considered one of the world's best foods.

So, I made soup. As last night was the first rainy night we've had it Seattle for a while (really!), I was in the mood for something warming so I used Indian Spices. I also ended up using Chicken Broth to enhance the flavor, but this could just as easily become a Vegetarian soup with a good Vegetable Broth or just plain water instead.  It took only one hour to cook and I topped this beautiful and delicious with some caramelized Shallots because they brown up so nicely. And then I sprinkled on some chopped Cilantro before serving. It was so good - creamy, lightly spiced, definitely warming.  Now I have another soup to add to my repertoire.

1 14.5 oz can Chopped Tomatoes
8 - 9 cups diluted Chicken Broth (or can use Vegetable Broth or just Water)
Salt to taste

Put a large soup pot on the stove and heat the butter until melted. Add the Onions, Garlic and Ginger and stir until onions are softened. Add in the spices and cook until they change color by getting darker. Add in the Black Lentils, the Tomatoes and the Broth.  Cook for one hour.  Add additional Broth or Water if the soup gets too thick. Season to taste with salt.

When done, cook the Shallots in butter until Caramelized, stir them into the soup and top the soup with Cilantro to serve.

Lentils belong to the Earth Element so this is a primarily Earthy food. But the spices, Garlic, Onions and Shallots contribute the Metal Element.  Since it is a soup, it is intrinsically Watery and the Wood Element is represented by the Chicken Broth. The Tomatoes bring in the Fire Element  so this then becomes a balanced bowl of soup!