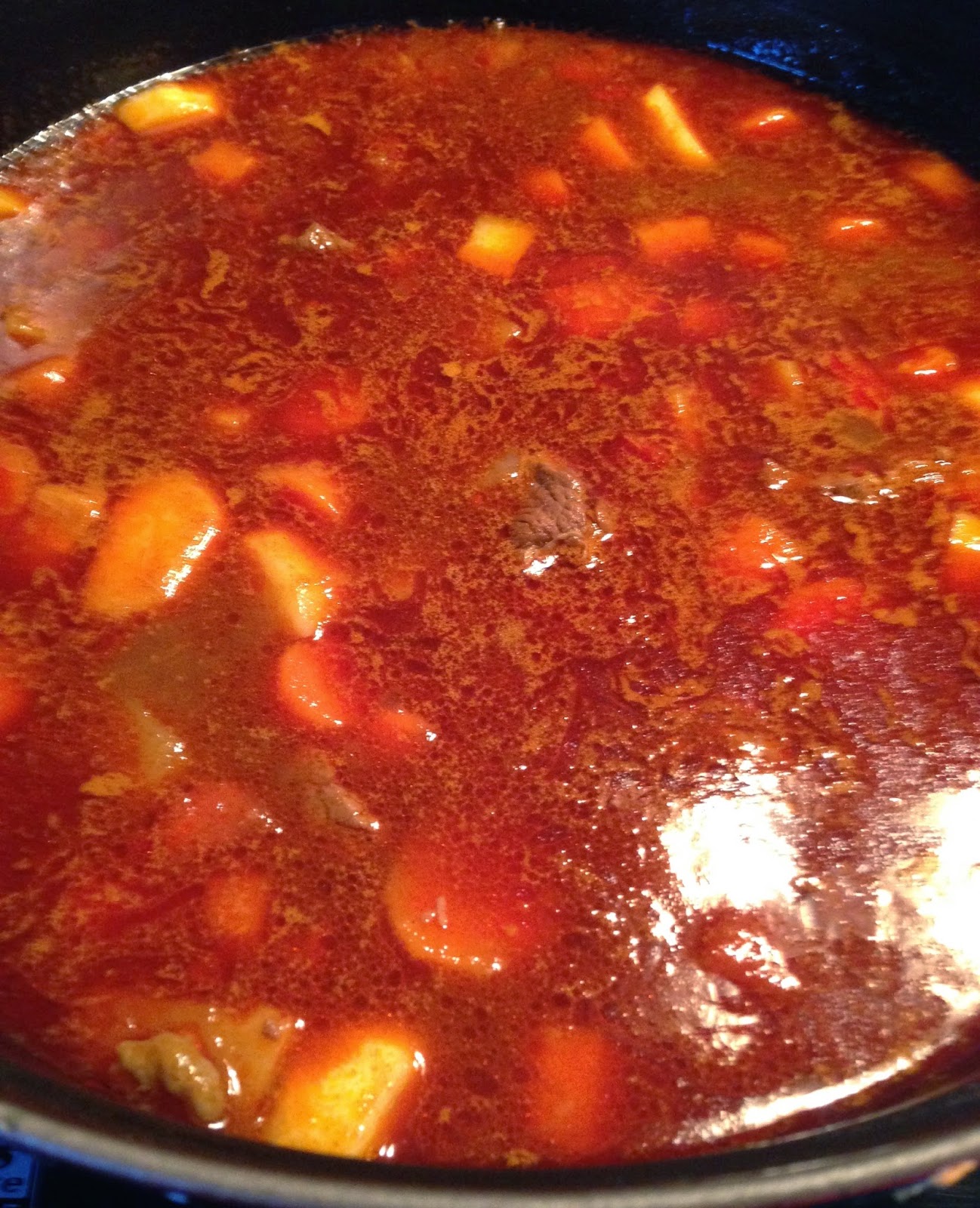 Goulash Soup is one of the first things I ever cooked. Of course, the first time I made, it wasn't exactly like this recipe as I have refined it over the years.  But how and why I made it are actually a funny family story.  When I was 7 years old (yes, you read that right), I told my mother that I wanted to cook dinner. She asked me if I knew what I wanted to make and if I knew how to make it and I said yes, she just needed to take me to the grocery store.  She took me and I proceeded to buy the ingredients to make Hungarian Goulash.

Now, don't ask me how I knew how to make it, but I did.  And, I remember being very upset at the grocery store, because they didn't have Hungarian Paprika and I had to use regular American Paprika instead. And, I proceeded to make a very simple version of Goulash using Beef, Paprika, Campbell's Canned Beef Consomme that I diluted, Onions and Carrots.  When my father came home, he was astonished because he thought my mother had made it and she only cooked Chinese food.  When she told him I had made it, he was horrified to think that she had let me use sharp knives and cook a hot soup by myself.  But, he liked it and then proceeded to ask me how I knew how to make it. I answered that it was something that I just knew it inside my head.  He asked me if I read about it and I said no or if I had seen someone make it on TV, another no. He kept asking, How did you know how to make it?  I simply didn't know how I knew, but I just knew that I knew and by the way, it was good.  My mother very nonchalantly told him that I was probably Hungarian in my past life, which made my father laugh out loud.  Years later, I was told by a psychic that I was a Hungarian Opera Singer in my past life and lived and worked in Vienna.  I don't know if that is true, but it is an amusing thought and I will admit that I do love Hungarian food and I love Vienna.

Anyway, this is a soup that I love to eat whenever I am in Austria as I haven't been to Hungary yet to have it there. I especially like eating eat after skiing. It is not something I make very often and I don't know why because I still love it.  So, I am sharing my updated version with you. I now like to add some Red Pepper and Tomatoes to freshen the taste and I love parsnips, so I throw those in too.  I personally like to add Caraway, but it's a spice that's not popular in my house so I usually leave it out.  Goulash is warming and nourishing and rich in flavor.  It's perfect for a cold winter day.  I hope you enjoy my grown-up version.

In a large stew pot, heat oil and add onions. Cook until soft and translucent. Add beef and cook without stirring until beef is slightly browned on one side, turn and cook pieces on their other side.  Then add in garlic and Paprika (and Caraway if using). Cook until the Paprika starts to brown slightly (this happens fast).  Add the broth and water and cook for one hour.  Then add in the Red Pepper, Tomatoes, Carrots, Parsnips and Potatoes, salt and pepper. Cook for an additional 30 – 40 minutes or until vegetables are tender.  Serve over noodles or with some crusty bread.

Beef is an Earth Food and it is cooked long and slow with the onions so they sweeten and become Earthy and the carrots, parsnips and potatoes add even more Earth. So, this is a fundamentally Earthy dish. The Paprika, Red Pepper and Tomato contribute the Fire Element.  The Metal Element is only represented by the small amount of Garlic and the Caraway if you use it.  The Water Element is only represented by the fact that this is a soup, although a thick one, so this element needs support in this meal or some other time during the day.  The Wood Element is missing so it is advisable to serve this with some crusty wheat bread, green leafy vegetables or some pickles.