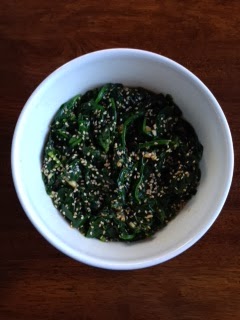 I had a Chinese New Year's Party for the Year of the Horse with a few close friends and I served many of my usual lucky foods. But, every year I try to bring in a couple of new dishes to keep it from being too repetitive.  However, like Thanksgiving, many of my friends like to know that they get to have their favorite dishes again. So this year I experimented with the greens. First, I offered more because horses eat greens so they are luckier than usual.  And, second, I brought in some foods from other Asian cultures rather than focusing just on Chinese dishes. I also needed something that was fast and could be made ahead since so many things had to be heated and cooked at the last minute. So, I went with Korean Spinach Salad which has always been a favorite of mine at Korean Barbecue restaurants.  Like many Korean dishes, it combines, soy sauce, sesame oil, garlic and sugar.  And it literally takes a few minutes to prepare.  It's really that simple and so delicious!

Bring a pot of water to boil and put spinach in for 30 seconds.  Rinse with cold water and squeeze gently to remove most of the water. Mix together the sauce ingredients and pour over the spinach.  Stir to mix and sprinkles with sesame seeds.  Serve at room temperature or chilled.

Spinach as a leafy green belongs the Wood Element.  The Soy Sauce (or Tamari), Sesame OIl and Sesame Seeds belong to the Water Element. The  sugar brings in a bit of the Earth Element and the garlic contributes the Metal Element. Only the Fire Element is missing and this dish is usually served alongside spicy Kimchi so that creates a balance.