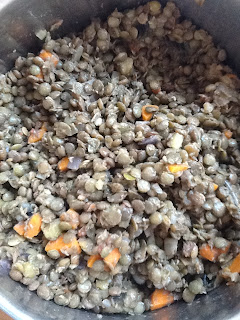 I made two salads each day last week for my students last week and this was one of the favorites so I promised to post it.  It's an interesting combination of textures because the eggplants contrasts so well with the lentils, lightly cooked carrots, onions and celery and tomatoes. The tomatoes mostly disappear into the dressing so you can barely see them but I think they add a lot of flavor. This salad gets better if you make it several hours or even a day ahead and it keeps well too. It gets the most flavor from the Balsamic Vinegar and Olive Oil dressing and from the ground cumin dusting the bites of pan fried eggplant. Lentils are a good meat substitute and are full of protein and in Chinese Medicine are considered a warming food that is good for the digestion.  This salad is very tasty and it somehow feels really healthy too.

Cook the lentils in water about 1" over the top with 2 teaspoons of salt until the lentils are tender - about 1/2 hour and then drain and put in the serving bowl.  Meanwhile, cook the eggplant with 1/4 cup of the olive oil in a frying pan until lightly browned and soft.  Then sprinkle with cumin and heat a few minutes longer until you can smell the cumin. Then set aside in a large serving bowl. Use another 2 Tablespoons of olive oil in the pan and add the red onion, tomato and celery.  Cook until the onion just begins to soften. Put in the serving bowl. Mix together the canned tomatoes, remaining 2 Tablespoons Olive Oil, Balsamic Vinegar, Honey and the remaining Salt and Pepper.   Pour over the lentil mixture, tossing to coat.  Let rest for several hours or even overnight in the refrigerator to meld the flavors.

Lentils, being pulses, belong to the Earth Element and the carrots add even more so this is a very Earthy salad.  The eggplant adds in the Water Element, the Olive Oil, Vinegar and celery bring in the Wood Element .  The tomatoes contribute the Fire Element and this dish is certainly salty enough to have the Water Element represented as well. Finally, the red onion represent the Metal Element.  Since all 5 Elements are present, this is considered a very balanced salad and great for a picnic or a meal to bring to work for lunch!