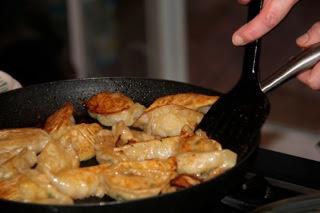 I taught a cooking class today for the first time in a long time and it was really fun! The dish that they most wanted to learn how to make was Potstickers. They are so much easier than people realize. No one in the class had ever made them before. Shaping them is actually the hardest part and when you use store-bought wrappers, it goes really fast. They are also much less expensive to make at home than when you buy them frozen. Plus these freeze so well that you can make a lot at one time and then save some for later. And the are so delicious! 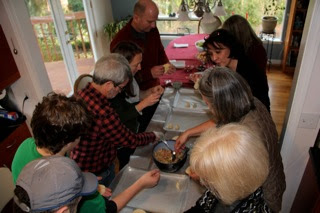 These are my grandfather, Kingway Lowe's recipe for Potstickers. I made them nearly every weekend of my life (while I was learning about face reading and hearing family gossip) so I've probably made thousands.... I can wrap them so fast and without looking, so I had to remember how to get people over their fear of wrapping them. If you mess one up, scoop out the meat, throw away that wrapper and start again. It's just takes a little practice to master wrapping Potstickers and if they don't turn out perfectly shaped, they still taste great!

So here are the Lowe family secrets for perfect Potstickers:

1. Season the meat a lot so that the Potstickers can be eaten alone without sauce and they will still taste good. You are not supposed to drown them in dipping sauce. It will also make the mixture moist enough to form into a meatball. (See photo below).

2. Chop the Napa Cabbage very finely. And, be sure to remove most of the large white ribs in the center of each leaf unless you chop it really well. They tend to poke out and make holes in the wrapper. I save them and slice them into soup or make a stir fry out of them.

3. Don't overfill the wrapper. Use a regular kitchen teaspoon and overfill it or use a Tablespoon and only fill it about 2/3 of the way with filling. If you put too much on the wrapper, just remove some with the side of the spoon. Trying to close an overfull wrapper makes a big mess.

4. Panfry on two sides. Most restaurants just brown the bottom, but we turn them to one side and brown that one too. It improves the taste.

5. Use chicken broth as your steaming liquid. It permeates the wrapper and gives it so much more flavor and this is the most important secret!

So, the recipe is below the pictures. I really hope you try to make them. You can use the same filling for wontons; just be sure to buy square wonton wrappers instead and use less filling (see below). You can also make these into meatballs and cover them with uncooked rice (I use medium grain) and steam them to make Pearl Balls, which is a good gluten free option. 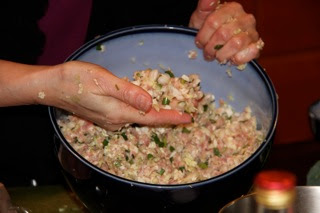 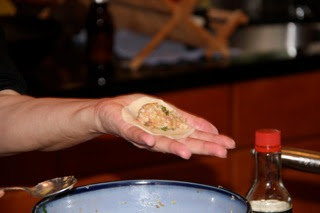 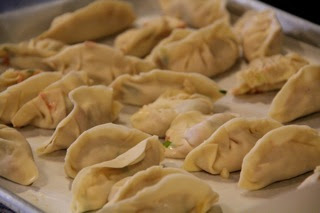 Mix together all ingredients thoroughly with your hands in a large bowl. Place about 1 scant Tablespoon of filling in the center of a Gyoza wrapper. Wet the entire round rim of the wrapper with water and bring the two sides together. Pinch to seal in the center. Then, pinch the dough on the side of the dumpling closest to you in by pushing in with your index finger and then folding it towards the center to make a pleat and pinch slightly, then do that agian with two more pleats and pinch all of them on that side firmly to seal. Repeat on the other side and stand the Potsticker on a wax paper covered tray so that the ends of the pleated side curve in slightly. Repeat until all Potstickers are filled. They can then be put in the freezer on the tray or plate – freeze until firm and then put in plastic bags for use later (no need to unthaw – just cook a few minutes longer with a little extra broth) or if you are cooking them immediately:

Put oil in a 10 inch frying pan (or 2 Tablespoons for a really large pan) and add just enough Potstickers so that none are touching. Cook until the bottom is browned, then turn them over to another side (use your fingers to grab the top - they won't be hot). When that side is browned, pour in chicken broth and cover (do not lower heat). Cook until broth evaporates. Take the cover off, push them around the pan a bit to crisp them back up and then put on a plate to serve. Repeat with next batch.

Equal amounts soy sauce and seasoned rice vinegar with either a little minced green onion in it or a little minced fresh ginger. If desired, mix in a small amount of chili oil or Chili Garlic Sauce (about 1/2 - 1 teaspoon) to spice things up. Sweet Thai Chili Sauce is also good as a dipping sauce.

Note: this recipe can also be used for filling wontons. Use square wonton wrappers and seal as a triangle. Then bring together the two pointed ends and pinch them together. Put wontons into soup (made with chicken broth – see post for Chinese Chicken Soup on 4/21/2011) or water and cook for 5 – 7 minutes. If serving boiled, mix into a chili sauce (like Lee Kum Kee Chili Garlic Sauce or soy vinegar sauce above).

The main ingredients of Potstickers are pork, which is a Water Element food and Napa cabbage, which belongs to the Earth Element. The wrappers are made of Wheat, which is part of the Wood Element and if you use ground chicken you add even more. The chicken broth contributes a bit more of the Wood Element too. The green onions represent the Metal Element and the soy sauce and sesame oil increase the Water Element contribution. Only the Fire Element is missing, so be sure to add some chili oil to your dipping sauce or serve another chili sauce on the side to make this a balanced snack!