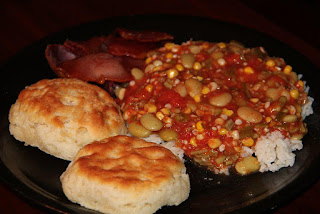 This recipe comes from my from my former Mother in Law, Joyce in Tennessee, whom I adore. She learned how to make this amazing soup from her husband's family in Walterboro, South Carolina. My ex, Hal who is still a really good friend was visiting his parents last week and sent me this picture, which made me remember all over again how much I love this soup. I've actually made it many times and so I'm going to make it again soon when I find some fresh okra - I usually get it at an Asian grocery store. This soup is made of okra (which is a mucilaginous food that is great for your digestion), fresh tomatoes (but canned will do if necessary), fresh lima beans (but frozen are acceptable and I personally prefer Edamame or green soybeans that are also grown in the South), and fresh corn (although you can use frozen).

This soup is an amazing fresh vegetable medley that is really more like a stew. I have doctored the more traditional version by adding onions and chicken broth to give the sauce more depth. For a vegetarian version, use vegetable broth instead. Add more broth if you want your soup to be soupier. But, this soup is traditionally served over long grain (Carolina) rice and is often accompanied by biscuits, country ham and cane syrup that is sopped up by the biscuits. And don't forget to add lots of black pepper when you serve it as this brings out the sweetness of the tomatoes and corn.

4 - 6 cups chicken broth (or vegetable broth)
1 package frozen lima beans or use 2 cups of frozen Edamame (green Soybeans that are already shelled)
1 lb fresh okra, ends cut off and cut into ½ inch slices
3 lbs fresh tomatoes, peeled and diced (or can use a large 28 oz can of canned whole tomatoes chopped with the juice)
2 cups fresh (or frozen) corn kernels – cut off about 2 – 3 ears of lightly cooked corn
1 onion chopped
2 tablespoons safflower oil
Salt and Pepper to taste
Saute onions and garlic in a frying pan until soft and translucent. Add to large soup pot and pour in chicken broth. Add lima beans or Edamame, okra, tomatoes and corn. Bring to a boil and turn down to a simmer and cook for 45 minutes or until lima beans are tender - cook for only for 1/2 hour if using Edamame instead.

This dish is very colorful, so you already know that it is going to have some inherent balance to it. Okra and corn belong to the Earth Element and this soup is thick so it is basically an Earthy preparation. But, the tomatoes bring in the Fire Element, the lima beans bring in the Water Element, the onions add the Metal Element and the chicken broth contributes the Wood Element. It's a balanced meal all by itself! The rice adds more Metal, the pepper adds more Fire, the biscuits more Wood, the Country Ham more Water and the cane syrup - if you use it - adds even more Earth. That's still an amazingly balanced meal!