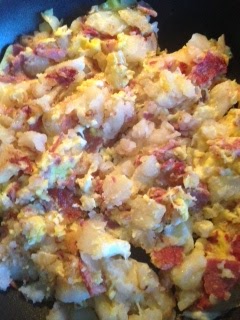 When I was a child, my father was responsible for Sunday breakfast. It was my Mom's one morning off and my father made pancakes most of the time. I wasn't crazy about pancakes until I discovered real maple syrup, so I was always happiest when he made what we girls called German Fried Potatoes, but is really called Farmer's Breakfast. This dish is basically composed of the leftovers from a roast dinner. It is a combination of potatoes, onions, meat and eggs fried together in a pan and was quite common for farmers to eat after coming in from milking the cows. It is a hearty meal, which farmers need and was truly something that my Pennsylvania Dutch grandfather ate when he was a boy on the family farm. I was quite tickled to discover that it really is an old German dish - called Bauern Fruhstuck - which means Farmer's Breakfast! I've also had it in a hotel in Denmark served with eggs sunny side up on top.

Since I don't make a lot of roasts and don't often have leftover potatoes, I usually cook it with fresh potatoes which takes longer, but the potatoes have more texture. It is quite versatile and a lot of different meats can be added. I suppose it is a lot like Corned Beef Hash if you have leftover Corned Beef and boiled potatos except that you add the eggs into it. It is also like the Spanish Tortilla, except it is scrambled instead of being made into a frittata and cut in wedges.

Like many homey foods, it is an excellent way to use up leftovers. This dish is often something I will make for dinner, especially if I have already cooked potatoes as then it only takes minutes to make. One of the tricks with fresh potatoes is to add the onions in after the potatoes are nearly done or the onions will burn. One of my grandmother's additions was to put in cubes of stale bread at the end and crisp those up too, which adds a whole different dimension of texture. My sisters and I like to eat it with ketchup although my father liked Worcestershire Sauce on it and if my mother ate it, she put on Tabasco sauce. I hope you enjoy this German farmer's breakfast dish.

In a large frying pan, heat oil until hot. Add in potatoes and cook until just starting to brown and then turn over and continue to cook until brown on the other side. Add in onion and continue to cook until onions start to brown. Add in meat and cook until meat is warmed. If desired, make a space in the center of the pan and put in butter to melt and add in bread cubes. Cook until browned and turn until browned on the other side. Stir it all back together again and season with salt and pepper - it takes more than you think! Taste until you like the saltiness level. Then pour the eggs over the top of the potato mixture and cook until it just starts to set, then turn over and break up so that the egg scrambles. Remove as soon as the egg stops being runny and serve.

Potatoes belong to the Earth Element and eggs and salt bring in the Water Element. Onions contribute the Metal Element and the bread cubes add the Wood Element. Only pepper brings in a tiny bit of the Fire Element so this element needs support so lamb would be the most balancing meat (chicken would bring in Wood, pork or ham - Water, beef adds more Earth). But, if you don't use lamb, Ketchup or Tabasco Sauce will add the Fire that completes the Five Elements in this one dish meal.