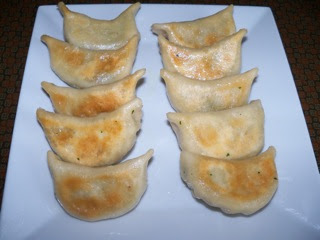 It's New Year's Eve and instead of thinking about celebrating with champagne, I've been making Potstickers for New Year's Day. Potstickers are a lucky food because they look like the shape of Chinese gold ingots. I usually make Pork with Chinese Cabbage and Scallion dumplings  But, I decided to use spinach instead as any greens help bring in paper money like the American dollar - that's one of the main kinds of luck to try to bring in by eating special foods on New Year's Day. I have heard that in some countries chicken isn't considered a lucky food as chickens scratch backwards, but for the Chinese, it is one of the foods traditionally served - especially whole for Chinese New Year to symbolize family togetherness. I also wanted a less fatty meat than pork.  I often mix pork and chicken anyway so that it lowers the fat content of the dumplings. For these dumplings, I used minced chicken breast and Shitake mushrooms. It's a combination I often used for a stir fry as in the photo and it turned out to be a wonderful filling for dumplings. The only difficulty I had was having to make the dumpling wrappers from scratch as I haven't located an Asian market nearby yet - the recipe is included below and it actually easier and more fun to shape than the store bought ones. And, I had to chop the chicken myself as I couldn't find it already ground but with sharp German knives, I enjoyed that too. I am going to serve these dumplings pan fried, which symbolizes gold along with a whole fish and stir fried broccoli - fish is another lucky food for New Year. Dessert will be a big bowl of tangerines - also a lucky food. If you like, you can steam them or boil them and then they are considered Silver. I'm giving you my grandfather's secret method of making Potstickers - he used chicken broth to steam them and they are so much tastier than when you just use water. I've also included the traditional dipping sauce recipe although my sons love Thai Sweet Chili Sauce the most. These dumplings are great - I hope you try to make them. Chinese New Year is a chance to do it all again (Feb. 3rd) and the menu will be much more extensive. Happy New Year!

In a small frying pan and using a small bit of oil, cook onions and garlic until onion is soft. Mix with chicken, spinach, mushrooms and seasonings together in a large bowl. Use 1 rounded teaspoon per wrapper. Place in center of a round Gyoza or Potsticker wrapper bought or made from scratch (see below). Wet around the edges if using the store bought kind. Pinch together in the middle (or you can seal all the way around and make flatter half moons if desired) and then pleat the edges on the side facing you - 3 times on each side to toward the middle make the Potsticker stand upright and curve inward. Place on a sheet of wax paper until all are filled. 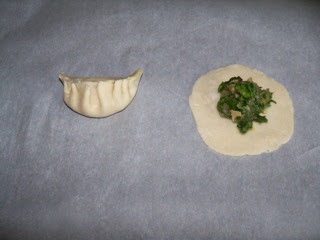 In a large frying pan with a lid, heat 1 Tablespoon of oil, heat for a few minutes over medium heat and place Potstickers in - as many as possible without touching. Let the bottom brown and then pour in 1/4 cup chicken broth if using store bought wrappers and 1/2 cup of chicken broth if using homemade wrappers. Cover and steam. When the broth is mostly absorbed, take off lid and recrisp the bottoms. Remove to a serving plate and put in a warm (200 degree) oven until all the Potstickers are made. Serve with dipping sauce recipe (below). 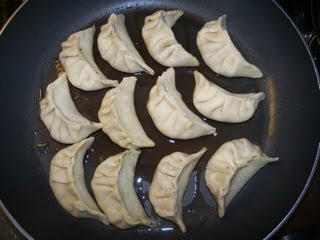 Mix salt with flour in a large bowl. Sprinkle in 1/3 cup of the the water and using your hands, mix water in adding more water if necessary until dough gather into a ball. Knead dough until it is shiny and holds together. Wrap in plastic wrap and let rest of 1/2 hour.

Cut dough into 4 sections and roll into 6" logs. Cut each log into six equal pieces and cover them with a damp towel. Roll out one piece at a time with a rolling pin until you have about a 3 1/2 inch circle. Fill as directed above. 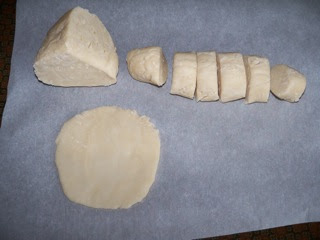 The wheat in the dumpling wrappers brings in the Wood Element as does the chicken and spinach and rice wine vinegar in the dipping sauce. The onions, garlic and ginger or green onions add some Metal Element and the soy sauce and sesame oil represent a small bit of the Water Element with the Shitake mushrooms enhancing Water and also the Metal Element because of its' wonderful Umami flavor. The Fire Element is only found in the chili paste or chili oil or the Thai Sweet Chili Sauce if you use that, so Fire is an element that needs to be enhanced and an Earth food needs to be added to balance out the meal.