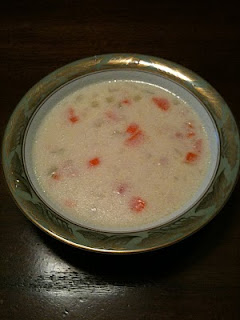 Here in the Pacific Northwest, we have some pretty amazing shellfish - Penn Cove Mussels, Olympic Oysters and Razor Clams are some of my favorites. About the oddest one around is the Geoduck Clam. It's the world's largest shellfish usually weighing between one to three pounds. It is hard to dig up, very expensive to buy, but makes wonderful clam chowder if you can get past how scary it looks. They are a food that I've always wanted to try but was always put off by the high price and the fact that the siphon proturding from the shell looks an awful lot like a brown elephant's tusk. Yesterday, I was given the gift of 2 1/2 pounds of Geoducks (already cleaned and ready to be cut up and made into soup and fried clam strips. I had read that this could be a pretty tough clam and the meat was usually ground up, but I found that if you cut the clam meat into little cubes and you don't cook them for very long, they can actually be very tender. I thought the Geoducks made great chowder.

Here's the recipe in case you get some of these clams someday, but if you don't - this recipe is equally good with any other kinds of clams including canned clams - I prefer the Snow Brand. Just make sure you have the 8 - 10 ounces total of chopped clams - I always go for lots of clams. By the way, I also like to add little pieces of carrot to the soup as it is so pretty along with the pale green of the celery in the creamy soup juxtaposed against the pink pieces of bacon and the beige clams. Clam Chowder is one of my favorite soups - I love the soft briny scent of the sea that reminds me of my childhood on the coast of California. Serve with lots of saltine crackers!

8 - 10 ounces of chopped clams
1 large onion chopped
2 Tablespoons butter
4 slices of bacon chopped
2 small carrots or 1 large carrot, peeled and cut into small dice
2 small stalks of celery or 1 large stalk, chopped into small pieces
2 medium or 1 very large potato cut into small pieces
4 cups clam broth or juice (canned or bottled)
2 cups whole milk, half and half or cream
2 - 4 Tablespoons cornstarch (depending on whether you like thin or thick clam chowder) mixed with enough water to make a slurry.
Salt and Pepper to taste

Cook bacon in soup pot until it has rendered its' fat and is still soft. If it is low fat bacon and doesn't give up much fat, add butter to the pan and then add onions. Cook until translucent then add carrots, celery and potatoes. Stir for a few minutes until they just start to soften. Add in clam broth and clams and bring to a boil. Then add milk and just return to a boil. Turn down heat and simmer for 15 minutes. Add cornstarch and water mixture and stir until thickened. Taste for seasoning and add salt and pepper to your liking.

Clams being from the sea are naturally part of the Water Element and so is the salty bacon and it' is a soup made mostly from briny clam broth. This soup is therefore good for the kidneys and is very soothing and clams are said to help clean the liver too. The onions add the Metal Element as does the milk. The potatoes and carrots contribute a good amount of the Earth Element. Celery adds just a touch of the Fire Element and if you'd like to have more, you can add a little bit of Tabasco Sauce to liven things up or add a Fire dessert. The only thing missing is the Wood Element, but luckily saltine crackers are made from wheat so they bring that element in and you can also use a little lemon squeezed in too. This ends up being a pretty balanced little bowl of soup.